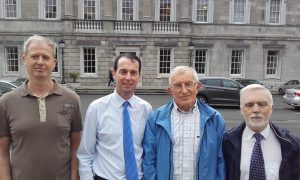 These are three key areas in which men’s interests are neglected or ignored and have been for many years. We had hoped for a considerable period for discussion following these but time ran short and ended what could have been a fascinating exchange of views.

Nevertheless. this was a real achievement which we hope was of benefit to those members who came along offering them an insight into how men think about issues which are rarely if ever covered in the media and over which there seems to be a blanket of secrecy which is so difficult to break. While the first and third topics met with a measure of agreement that there were real issues which needed urgent attention it was the topic on Domestic Violence and the Istanbul Convention which drew heavy criticism. We were not surprised by this as these are two of the most sensitive issues in the whole area of social policy.

It was our intention to present an approach and viewpoint which never gets a hearing and consequently comes as such a surprise to many accustomed to the standard narrative. Perhaps it was the first time for many of those present to actually read excerpts from the Istanbul Convention such has been the cloak of secrecy surrounding this document. No main daily has had the gumption to actually write a critique of this document and examine its foundations and its consequences. Much less has mainstream radio or tv organised a a panel discussion on it. This speaks volumes for the notion of free speech, increasingly seen by a range of sources as now in question.