The Threat to Free Speech in Universities

Academia has become a closed system, a moral community defined by a set of sacred progressive values. So writes Eric Kaufmann Professor of Politics at Birkbeck College London. Kaufmann has become a central figure in tracking the decline of free speech and academic values in Universities across the West. He along with another politics professor Matthew Goodwin attempted to hold a public discussion on the Immigration issue in 2018 and came in for severe abuse. The event eventually went ahead but it showed how difficult it is to even stage a debate on a sensitive issue.
In a recent essay for Quillette he says the fivefold jump in the rate of cancelling American academics which took place in 2019, present merely the tip of an iceberg of self-censorship and conformity.

The essay is based on work Kaufmann did for the Center for the Study of Partisanship and Ideology entitled “Academic Freedom in Crisis: Punishment, Political Discrimination, and Self-Censorship.” He set out to show the pervasive structure of punishment, discrimination, and fear that underpins conformity to academia’s progressive sacred values and affects a majority of conservative academics. He comes up with hard data
on the scale of the problem in the US, Canada, and Britain and argues that only government intervention can break the spiral of conformity gripping the contemporary university.

Kaufmann found that Political discrimination is a much bigger problem for academic freedom than no-platforming. One in three academics in the survey said they would discriminate against someone who supported the Leave side in the 2016 EU Referendum when hiring for a position, rising to nearly four in 10 among active social sciences and humanities (SSH) scholars.

Kaufmann quotes a YouGov poll in Britain which asks whether people support political correctness because it protects minorities from discrimination, or whether they oppose it as a threat to free speech. The 164,000 members of the British public polled oppose political correctness more than they support it by a 47–37 margin.

But among academics the result is different: among academics in SSH disciplines, (Social Science and Humanities)—the majority of the academic sample—about half (44–51 percent), and a clear majority of PhD students (61–70 percent), support mandatory race and gender quotas on reading lists. Against this, just a third of academics, and 15–19 percent of doctoral students, opposed the measures. No wonder the idea of decolonizing the curriculum has spread widely across university departments.

A related question asked respondents whether they prioritised academic freedom or social justice. This time there was a clear majority for academic freedom: 58% for compared to 26% against in the US and 53–34 in Canada. 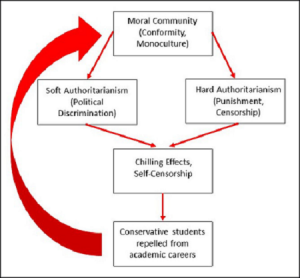 In the UK and further afield the Free Speech Union, FSU, has taken up the cases of some academics threatened with being fired or suspended for transgressing woke values.

Late in 2020 an open letter from students at McGill University demanded that anthropologist Philip Carl Salzman be stripped of his title as Emeritus Professor. Salzman had apparently been critical of the New Anthropology.

After a petition was started by the FSU in his favour which was signed by 1600 people, the Provost published a statement reiterating McGill’s commitment to free speech and affirmed that Prof Salzman’s status wasn’t in danger.

The Case of Professor Dorian Abbott at Chicago.

Free Speech Union asked members to sign a petition urging the President of Chicago University to issue a statement reaffirming his commitment to the Chicago Principles (the gold standard of university free speech policies). This was because an outrage mob were gunning for Dorian Abbott, a professor in the Department of the Geophysical Sciences, who’d committed the sin of criticising positive discrimination. Three days after that petition started, which was signed by more than 13,000 people, the University President did exactly what was asked and the mob quickly dispersed.

The UK Government plans to appoint a ‘Free Speech Champion’ to the board of the Office for Students to ensure free speech and academic freedom are protected on university campuses. This will be one element in a new academic free speech bill. The bill, which aims to strengthen free speech protections in English universities, comes after a report put out by the think tank Policy Exchange last year that, among other things, called for the creation of the new post. Eric Kaufmann was one of the authors of the Policy Exchange report.