So, what is Fatherhood? In traditional (pre-1970s) terms, ie the Nuclear Family, the father assumed three primary roles: the protector, the provider, and the disciplinarian (Tift, 2020). These roles, which were determined by the biological differences between males and females, typically referenced what were deemed to be natural differences in demeanour, in terms of social attitudes and social roles. These differences then manifested as acceptable social behavioural traits, such as male aggression, assertiveness, and competitiveness, whilst for women, they were typically expected to behave more passively, sensitively, and emotionally, and to be more likely to take disproportionate responsibility for childcare and housework. According to (Haggar, 2017) , supporters of these biologically based arguments claim that because traditional differences in gender roles derive from natural, biological, sexual differences, they must obviously be maintained because they reflect the natural order of things and that any change would be a change for the worse for women as well as for men. However, Fathers, globally, have evolved and have created a new reality for themselves and their families, which lies in the face of these biologically-based role definitions. For example, Dr Anna Machin, evolutionary anthropologist and author of The Life of Dad: The Making of the Modern Father (Machin, 2018), says a decade of research on dads shows this role has changed, and continues to change. This evolution, she argues, is not based on any new metaphysical influence, but more to do with changes in society which have facilitated and promoted a father’s natural capacities as a caregiver.

“Men are as equally biologically primed to parent as women are,” says Dr Machin.

So how has this translated to modern Irish society? According to the 2016 Census (CSO, 2016), and also Growing Up In Ireland study (ESRI & TCD, 2006-2017), of the 862, 721 families with children in Ireland, there are 218, 817 families headed by one parent (25.4% of the total). The breakdown by gender and marital status is provided in Figure 1, which shows that, for 13.5 % of this number (or 29,705 families equating to approximately 44,000 children), the single parent is the father. For many other estranged fathers, enforced non-residency means that they, at best, share custody of their children, have them for weekends or occasional weeknights (189,112 families and approximately 308,000 children where the father is non-resident) (Landy, et al., 2013, p. 2). For a parent with a strong natural propensity for caregiving, is this really how their contribution should be valued? 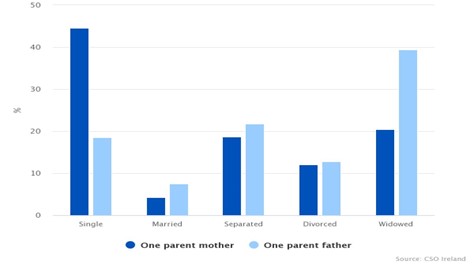 There is also the hidden group – fathers for whom continued contact with their children is prevented or made so complex that it is a serious strain on their mental health.

A report from an ESRC funded UK study[1] (Chalabi, 2013), where marriage rates (per 1000 population) are similar to Ireland (CSO, 2019), studied the role of fathers in the 21st century. The study found that 64% of men over sixteen are fathers[2]. Of these, 5% have non-resident children and, of these, almost 30% see their children less than once a month (13% do not see their children at all). A similar Ireland-focussed study (Fahey, et al., 2012) looked at the data generated from the Growing Up in Ireland National Longitudinal Study of Children and Youth in Ireland[3] initiative but due to the low response rate the authors deemed the data related to non-resident parents indecipherable (ie too open to bias). What this suggests, generally, is that almost one third of families have limited if any contact with their biological father. This is egregious in the extreme. Fathers need and want to parent (not visit), children need and want nurturing, not visiting, from both parents (Wallerstein, 1985). This has resulted in the prevalence of toxic modern societal constructs: Disenfranchised Father Syndrome, and Parental Alienation.

[1] This UK-wide survey Understanding Society (2009-11), was an ESRC-funded collaboration between Nat Cen Social Research and a multidisciplinary team at UEA’s Centre for Research on Children and Families Professor Margaret O’Brien, Dr Sara Connolly and Dr Matt Aldrich, with Kelly Giannakou as an attached PhD student. Published on the website www.modernfatherhood.org, and subsequently reported in the Guardian newspaper.