Peter Boghossian, a professor of philosophy at Portland State University, resigned his post in September 2021. He had become an important dissident in US academic circles since he and two others published the now famous Grievance Studies Scandal in 2018.

In this project they sent a number of hoax papers to leading journals in Gender Studies, Feminist Studies, Geography and other areas specialising in activism or grievance in order to see which would pass scrutiny. Seven papers passed through peer review and have been published, including a 3000-word excerpt of Adolf Hitler’s Mein Kampf, rewritten in the language of Intersectionality theory and published in the Gender Studies journal Affilia.

Instead of being lauded for exposing the appalling lack of standards they were excoriated by academics in these areas.

Boghossian was suspended while under investigation and though exonerated has, since then, been subject to constant harassment and vilification in his university. He decided he had enough. In his resignation letter to the Provost of Portland State he pointed to its complete surrender to woke ideology. He says the institution is now “a social justice factory whose only inputs are race, gender, and victimhood and whose only outputs are grievance and division”.

In 2017 Boghossian and Lindsay published a fake gender studies paper, entitled The Conceptual Penis as a Social Construct, in the peer-reviewed social science journal Cogent Social Sciences. The paper was written in the jargon typical of gender studies papers but was deliberately constructed to be completely  nonsensical. “We wrote an absurd paper loosely composed in the style of post-structuralist discursive gender theory. The paper was ridiculous by intention, essentially arguing that penises shouldn’t be thought of as male genital organs but as damaging social constructions. We assumed that if we were merely clear in our moral implications that maleness is intrinsically bad and that the penis is somehow at the root of it, we would get the paper published in a respectable journal.”

Despite being a hoax it is now one of the most quoted papers in Gender Studies. You can listen to a podcast of Boghossian with Jonathan Kay here.

We cannot leave this topic without mentioning that the two other participants in the hoax, Helen Pluckrose and James Lindsay have just published a highly acclaimed book: Cynical Theories: How Activist Scholarship Made Everything about Race, Gender, and Identity—and Why This Harms Everybody.

It was chosen as Book of the Year by the Times.

The Free Speech Union has written about the NHS’s employment of an army of Diversity, Equity and Inclusion ‘experts’ to promote “anti-white propaganda”. One blog post on the NHS’s Leadership Academy website advised white NHS employees to “work on their empathy” and how they should think and act. Tom Slater wrote about it in Spiked.

FSU has drawn attention to other issues:

Oxfam’s staff have been made to answer a ridiculous survey on “whiteness” and “white privilege”. Employees found the survey’s language “impenetrable, offensive and divisive”, the Times reported.

American Express forced employees to undergo critical race theory training sessions, encouraging them to rank themselves on a hierarchy of “privilege” and apply the hierarchy in the workplace, with “privileged” employees deferring to “marginalised” groups, according to Fox Business.

The US Senate has voted to stop funding the teaching of Critical Race Theory in American schools.

Some time ago we drew attention to the way woke ideas have infiltrated corporations and businesses.

A book has now appeared written by an insider, American entrepreneur Vivek Ramaswamy, who says corporate wokeness is the defining scam of our time. 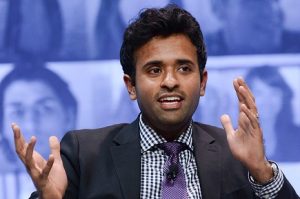 According to the Barnes and Noble website, Ramaswamy has founded multibillion-dollar enterprises, led a biotech company as CEO, became a hedge fund partner in his 20s, trained as a scientist at Harvard and a lawyer at Yale. Here is an excerpt from his book:

“On Jan. 6, 2021, an angry mob of rioters stormed the US Capitol as Congress convened to certify the results of the 2020 presidential election. It was a disgrace, and it was a stain on our history. When I watched it, I was ashamed of our nation. It made me want to be a better American.

But I grew even more worried about what happened after the Capitol riot. In the ensuing days, Silicon Valley closed ranks to cancel the accounts of not only the people who participated in that riot, but everyday conservatives across the country. Social media companies, payment processing companies, home rental companies, and many more acted in unison. It was a Soviet-style ideological purge, happening in plain sight, right here in America.”

He argued against the social media companies in the Wall Street Journal but in the end: “I decided to practice what I preached. It wasn’t easy, but in January 2021, I stepped down as CEO of my own company, seven years after I founded it, and gave the job to the person who was most qualified to do it.

At the company town hall explaining my decision to step down, I said that it was important to separate my personal voice as a citizen from the voice of the company, in order to protect the company. No one was confused.

I do think there’s a double standard at play in America, but ultimately I didn’t step aside because I feared a firestorm. I did it because my own beliefs told me I had to keep business and politics apart.

A good barometer for the health of any democracy is the percentage of people who are willing to say what they actually believe in public”.

But Ramaswamy may not be alone and a change may be afoot In Silicon Valley. A handful of founders and CEOs inspired by Brian Armstrong of Coinbase have said the unsayable. In the face of shop-floor social-justice activism, they’ve decided business owners should resolve to stick to business. No more politics, business should be “mission focused.”