One of the many extraordinary developments of the last decade is the way so many big corporations have embraced woke ideology. Google, Facebook, indeed all Silicon Valley, Pepsi, Chevron all falling over themselves to proclaim their adherence to woke dogma. In June 2020 Pepsi announced a multi-part $400 million campaign that includes everything from “mandatory unconscious bias training” to adding “100 black associates to our executive ranks.” Not to mention the major media companies like New York Times and Washington Post. How did this come about? Why are corporations woke?

One possible answer is given by Richard Hanania President of the Center for the Study of Partisanship and Ideology, in a much-discussed essay,  asks why almost every major institution in America that is not explicitly conservative leans left. In a country where Republicans get around half the votes or something close to that in every election, why should this be the case?

More people give to liberal causes than to conservative

He goes on: This post started as an investigation into Woke Capital, one of the most important developments in the last decade or so of American politics.

The scope of the issues on which corporations feel the need to weigh in is certainly expanding, now including LGBT issues, abortion laws, voting rights, kneeling during the national anthem, and gun control.

We expect business to be more right-leaning, and corporations throwing in with the party of more taxes and regulation strikes us as odd.

His answer is that Democrat supporters want their preferred policies to happen much more than Republican supporters. They campaign more, give far more money to the cause and are much more vocal on social media and lobby politicians more. Because they punch above their weight, institutions are more responsive to them. He calls this cardinal utility.

He gives two graphs to support his point. The first graph shows the 100 occupations with the most workers and whether they donated to Biden or to Trump. It lists teachers, doctors, lawyers, engineers, professors, nurses etc who donated overwhelmingly to Biden. A much smaller group donated to Trump including truckers, construction workers, electricians. 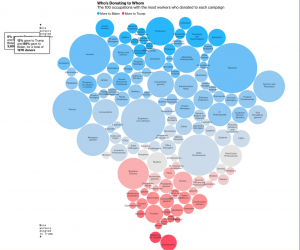 The second graph is even more lopsided. It lists the 100 employers with the most employees who donated to each campaign. All the major universities, Google, Amazon, Microsoft and major banks and corporations and government agencies supported Biden. In fact, the only ones that supported Trump were NYPD, US military and US marines. 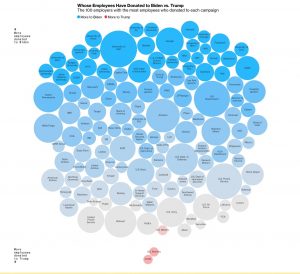 He finds more people give to liberal causes than to conservative.

So while Biden beat Trump in the popular vote by 51%-47% (+4), in the donor game, Biden beat Trump by 61-39% (+22%). It is therefore unsurprising that Biden got more donors than Trump across most professions, and in almost every large institution.

Another line of evidence showing that the left simply cares more about politics comes from Noah Carl, who has put together data showing liberals are in their personal lives more intolerant of conservatives than vice versa across numerous dimensions in the US and the UK. Those on the left are more likely to block someone on social media over their views, be upset if their child marries someone from the other side, and find it hard to be friends with or date someone they disagree with politically. Here are two graphs demonstrating the general point.

Hanania sums up his position this way: democracy does not reflect the will of the citizenry, it reflects the will of an activist class, which is not representative of the general population. Populists, in order to bring institutions more in line with what the majority of the people want, need to rely on a more centralized and heavy-handed government. They can argue for liberation from elites, who aren’t the best citizens, but those with the most desire to control people’s lives, often to enforce their idiosyncratic belief system on the rest of the public.

If they don’t choose this path he reckons they will continue to lose the culture war at least until they are able to inspire a critical mass to do more than just vote its preferences.