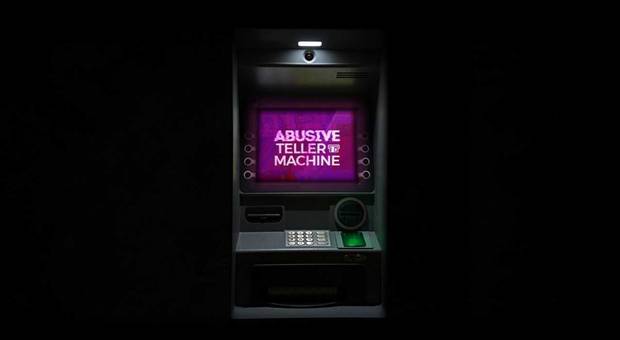 AIB has become the latest big company to enter the fraught world of gender politics by releasing on April 29 a Youtube video    which deals with financial abuse by partners.
The video in collaboration with Women’s Aid was produced by the Digital Marketing and Innovation department of AIB and features an Abusive Teller Machine which asks highly intrusive questions of the woman who comes to draw money from it.
It closes by giving a figure of 198,000 women it says are victims of financial abuse by partners at any given time. We contacted AIB and asked where the figure came from and were told it relied on figures supplied by Women’s Aid. The contact further volunteered that 90% of victims of domestic abuse are women.

We probed a bit deeper and came up with an article on the RTE website which was published on the same day and gave further information. There appear to be two sources: One is the annual report by Women’s Aid which gives a figure of 1500 calls relating to financial abuse out of a total of 19,000 calls; and the second is a claim based on an EUFRA survey from 2014: As well as this, according to a survey by the European Union Agency for Fundamental Rights Agency Violence against Women, one in 10 women in Ireland experience financial abuse from their partners or exes at any given time, and almost 200,000 women are currently in financially abusive relationships.

The FRA survey was a politicised survey, an example of the gendered perspective

A check of this survey reveals that 6 key indicators were used; financial abuse was not one of them; it comes under the broader term of psychological abuse. The relevant tables are 4.1 which gives an overall result for the EU and 4.2 which lists results for individual countries. Under Table 4.2 the figure for Ireland was that 11% experience psychological abuse with current partner but this term covers 5 types of abuse. Table 4.1 gives a breakdown of Psychological Violence and says for the EU as a whole that 5% experience Economic Violence with a current partner.

Conclusion: Neither the annual report of Women’s Aid nor the FRA survey can justify the figure of 198,000 women said to be victims of financial abuse.
Notice also the phrase: one in 10 women in Ireland experience financial abuse from their partners or exes at any given time.
One has to ask what the role of an ex is here? How does an ex control a woman’s current spending?

The FRA survey was a politicised survey, an example of the gendered perspective. It surveyed 42,000 women throughout the 28 EU member states but not a single man. The methodology is utterly flawed. We know of no large-scale survey on domestic violence which chooses to omit half the population from its sample.
Crucially, the figure that 90% of victims of domestic abuse are women is completely false. The 2005 NCC report, the most recent authoritative source for Ireland, stated that 29% of victims of severe abuse were male. Further, if all abuse was reckoned, there was near parity between men and women, 26% v. 29%. It cited figures for physical, sexual and emotional abuse but gave no figure for financial abuse.

But there is overwhelming recent evidence from many western countries that men and women perpetrate domestic abuse, physical, emotional, psychological, at comparable rates. Clearly  AIB choose not to inform itself of this evidence.
That evidence steadily accumulates against the conventional narrative; there have been articles, surveys, reports for many years which display a remarkable consistency of outcomes across a whole range of key indicators. This is true whether the research is done in the US, Canada or Europe.
Here is the conclusion of the PASK report :  Among PASK’s findings are that, except for sexual coercion, men and women perpetrate physical and non-physical forms of abuse at comparable rates, most domestic violence is mutual, women are as controlling as men, domestic violence by men and women is correlated with essentially the same risk factors, and male and female perpetrators are motivated for similar reasons.
A long list of other reports are consistent with this in detail. For an in depth look at and a exhaustive assessment of the literature on Intimate Partner Violence (IPV) consult this survey.

Tellingly it begins: “The EU refer to violence against a female victim by her male partner as ‘gender-based violence’…  however, it has been heavily criticised as a theory that is ideologically based rather than empirically supported. Indeed, hundreds of research findings exist that undermine the exclusivity of the gendered perspective”.

Our letter to AIB concludes as follows:
Finally, AIB allowed Women’s Aid to reap a great deal of favourable publicity on the back of this. By allying itself with a powerful lobby group, in a manner which was not fair, objective or impartial, it attempts to curry favour with the public on a matter on which it clearly believes there is only one side.

There are plenty of facts about domestic violence which never get aired but one will suffice here. According to Tusla, the amount spent on services for men in 2017 came to 1.4% of the total spend on all services for the year.

Following on a disgusting ad by Gillette in Jan. this video clearly hopes to capitalise on the current trend throughout the western world of portraying men in the most negative light and of thereby jumping on a bandwagon hoping to ingratiate itself with so-called progressives who are currently calling the shots in our society.