The threat to academic inquiry and free expression in the universities has deepened alarmingly. This threat has been growing for years in the US, but in recent months the attempts to silence academics seen as outspoken has reached a new intensity.
In a stirring Sunday Times column on April 14, the historian Niall Ferguson recounts how a number of academics have been blacklisted in the past year for petty reasons and speaks of the fear that has gripped the academic community.
In the article titled Join my Nato or watch critical thinking die, Ferguson warns: A new red army is out to silence debate. We must rise up and resist it.
He tells of how the philosopher Sir Roger Scruton who had been appointed as chairman of the government’s commission on buildings was targeted.
The campaign against him culminated in the publication of a cynical hit-piece in the New Statesman, which sought to portray him as a racist. The government immediately sacked him.
But according to Ferguson: “In reality, Scruton had been framed. The author of the New Statesman hatchet job, George Eaton, had edited quotations and inserted his own commentary with the clear intention of getting him sacked.”

He lists many other victims of the radical left. US political scientist Samuel Abrams, who now faces a “tenure review”. His thoughtcrime? An article pointing out that academic administrators are even more left-leaning than professors.
January’s cause célèbre was that of Peter Boghossian, a philosopher at Portland State University, who is being investigated by his own institution. Why? Because he was one of the perpetrators of the brilliant “grievance studies” hoax, which exposed the ease with which supposedly scholarly journals could be duped into publishing bogus articles.

In March Jordan Peterson was informed by Cambridge that the visiting fellowship he had been offered by the faculty of divinity was being cancelled.
Ferguson himself a celebrated academic, issues a rallying call: From now on an attack on one of us must be considered an attack on all of us. I therefore invite all who believe in the fundamental human freedoms to sign a new Non-conformist Academic Treaty.
Ferguson’s willingness to put himself on the line is admirable. One hopes that this call will be heeded.
The dangers to which he points are echoed by other sources, from Heterodox Academy to a growing number of individual academics particularly in the US. 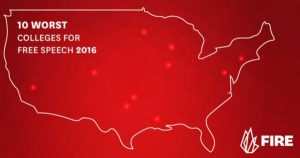 A months-long investigation into the state of free speech at elite private school, Tufts University, by The Foundation for Individual Rights in Education (Video here) last year found that students have been “systematically investigated, interrogated by police, and punished by Tufts for speech the university claims, generally, to permit”. FIRE has been tireless in its defence of free speech on US campuses and in exposing breaches.

Another phenomenon has been the demand for staff to sign up to a new strain of social justice ideology.
UCLA now requires all professors applying for a tenure-track position to submit an “Equity, Diversity, and Inclusion” statement.

A well-known social scientist Lee Jussim has given good reasons to be suspicious of such statements; In a powerful piece titled “My Diversity, Equity and Inclusion Statement” he comments:
Many academic social justice activists are creating, not an inclusive society or academy, but an exclusive one. They are not seeking to end discrimination; they are seeking to change who is targeted with discrimination.
He too instances further examples of outrages on academics. Listing a number of reasons why he is afraid of the current witch-hunt he includes this:
I am afraid because the U.S. National Labor Relations Board found that James Damore’s discussion of the available scientific evidence on the biological bases of sex differences were “discriminatory and constituted sexual harassment.” Are scientists who study biological bases of sex differences also engaging in “sexual harassment”?
James Damore was the engineer fired from Google for responding to a query raised within the company as to why there were not more women working there.

Finally, we should mention that bastion of particle physics, CERN, European centre for nuclear research. Alessandro Strumia is a physicist suspended by CERN after comments in which he claimed that physics did not discriminate against women, but on the contrary had been most accommodating to women entering the field. French journalist Peggy Sastre, has written about the case:
“CERN has just announced that it pays obeisance to a fanatical group of ideologues rather than to the imperatives of truth-based investigation. This is a witch-hunt, pure and simple, and it shows how thoroughly entrenched the new Puritans have become in the once-impregnable physical sciences.
CERN’s decision “sends an unmistakable signal to the entire scientific community that the era of fact-based scientific investigation (perhaps always imperfectly pursued and waning lately) has come to a decisive end.”
Addendum: We have just become aware that President Trump has signed an executive order promoting free speech on college campuses.