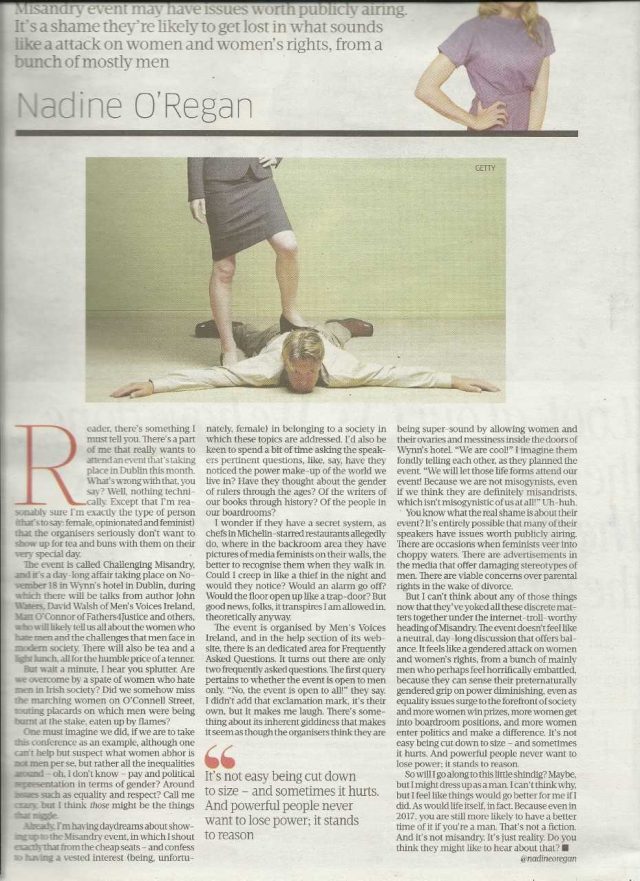 The theme of our 2017 Men’s Voices Conference has attracted a backlash. We expected it would draw some attention but nothing as virulent as this.

On November 5, an article appeared in the Magazine section of the Sunday Business Post by Nadine O’Regan. Obviously stung by the use of the word misandry in relation to the treatment men often receive, she gives free rein to her imagination in a page-long article in which she muses about the possibility of turning up at the conference to ask some questions.

Nadine does a lot of feeling and wondering: “It feels like a gendered attack on women and women’s rights by a bunch of mainly men”, she whimpers. This wouldn’t have been so bad but the image which heads up the piece really is repugnant, as you can see.

We wrote to the editor of the Sunday Business Post pointing this out, asked was this their policy and requested a right of reply. We got no answer. We decided to publish this article in response. An allegedly quality Sunday newspaper allows one of its journalists to write an article attacking a men’s conference for using the word misandry – and then tops off the article with a whopping example of misandry.

The irony was lost on them! Where was the editor?

When we first announced the theme of our 2017 conference, Challenging Misandry, there was a strong reaction, amounting to disbelief and ridicule from certain quarters one of which was HER magazine, and it suggested to us among other things that our campaign was having effect. But since then the vilification of women who dared to even challenge the #MeToo campaign, and the savagery of the attacks,  has made it very clear that we had a very valid point and that the  misogyny charge applies not only to many men but to any woman, even as revered a figure as Margaret Atwood, who calls for a halt to the terror. There is something deeply sick about this brand of feminism today, what we know as radical feminism. We would like to hear what HER magazine thinks about this as well as many other publications who take a similar line.

We have been looking back at our files for some more examples of misandry in the press and have come up with the following:

Jackie Jones is a well known writer for the Irish Times on health issues. Here is a typical piece from Oct. 3 2017: Women will not be safe until men change sexist, abusive behaviour

Here is one from Fintan O’Toole of the same paper, Boys must behave if women are to be safe   from Oct 31 2017, along much the same lines. The point is there is never a piece about abuse of men from either. O’Toole’s piece about the crass behaviour of a group of boys on a Luas tram, reprehensibly snuck into his piece that there was “the scent of rape” about the incident.

One of the most virulent, abusive writers from this stable is Anthea McTeirnan who gives vent to her rages from time to time. Here is one from Nov 2016:

Be nice ladies stop being shrill which contains this gem: “Don’t expect men to drain the murky swamp of inequality for the good of their health. Why should they? It is not going so well for them, after all, what with all that erectile dysfunction and all.”

When we tried to access this page we found it was not there and wondered who had removed it. Perhaps the editor can say.

But pride of place from the Irish Times stable must go to the redoubtable Una Mullally, whose vitriolic pieces seem to arouse the anger of men like none other. Here is a recent offering from 30 Jan 2018:  Male sexual dysfunction can no longer be ignored

The cause of criminal sexual behaviour is male sexual dysfunction according to Mullally. This was arrived at after a long sequence of criminal acts by individual males were catalogued.

In the crazed world inhabited by Mullally, apparently this is enough to indict a whole gender. In doing so she drags the Irish Times down with her.

How the mighty are fallen

One cant understand the depth of the current wave of misandry without looking at the opinion articles of some of the most famous print media. Take this one from the New York Times, an opinion piece by Stephen Marche of Nov 25 2017,  The Unexamined Brutality of the Male Libido a long scurrilous diatribe which includes the following quote: “For most of history, we’ve taken for granted the implicit brutality of male sexuality. In 1976, the radical feminist and pornography opponent Andrea Dworkin said that the only sex between a man and a woman that could be undertaken without violence was sex with a flaccid penis: “I think that men will have to give up their precious erections,” she wrote. It goes on: “How naïve must you be not to understand that sex itself is about power every bit as much as it’s about pleasure?””

These quotes are among the most hateful we have come across. Invoking a rabid misandrist neurotic like Dworkin to support its argument shows how far the New York Times has fallen. Sex itself is hateful and to be outlawed. This point was made forcefully by Catherine Deneuve and the 100 French women in their recent attack on radical feminism.

Yet Dworkin continues to be on the reading list on Gender and Women’s Studies courses in our universities.