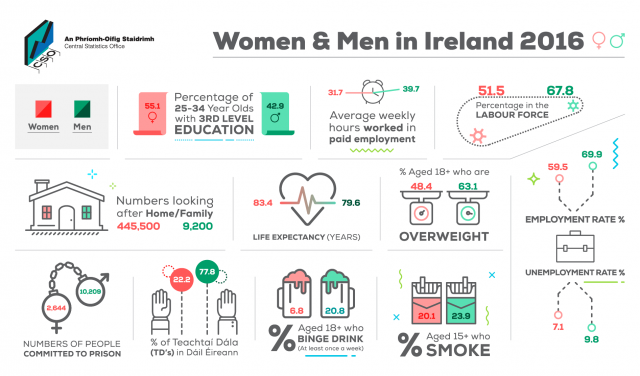 On Oct 18 2017 Rte news featured an item on the latest CSO publication
Women and Men in Ireland 2016. Comparisons were drawn between men and women in the area of health and obesity among others. For the first time in any context Mens Voices was asked to comment on the report and David Walsh drew attention to the suicide figures which are very stark: Male 399, Female 87, which he pointed out gives a Male-Female ratio of more than 4.5 to 1. These figures are appalling and the ratio has been at 4 to 1 or higher for decades. Walsh said that the reasons why males are taking their own lives at this rate is still not known and has never been properly investigated, an incredible feature of the inexplicable neglect of this touchstone among male issues across a whole range of social indicators.

Another issue which featured in the report was the comparison in third level education attainment among those in the 25-34 age cohort. This shows that 42.9% of men compared to 55.1% of women have this qualification, a stark difference. This is an issue which MVI has been highlighting for some time but again has got no attention.

Among the many health issues where men are at a disadvantage are: life expectancy, obesity, binge drinking, cancer and heart disease. During the years 2008-2013 Ireland had a National Men’s Health Policy in place. In a review carried out in 2014, Peter Baker said the policy was working, drew attention to some of the defects and recommended strongly that the policy be extended for a further 10 years. It is now near the end of 2017 but there is little sign that anything has happened. Once again men are at the bottom of the pile.