The Emperor Has No Clothes.

Almost every month brings new evidence to stand on its head the official narrative on domestic abuse, the only one which is accepted in government, in the media, among policy makers and the great majority of politicians. It is the only narrative which is constantly fed to the public on radio and TV with the by now well-known names called to comment, the self-appointed Cassandras lambasting the government for its inaction, calling for ever more spending and predicting dire consequences if there is not.

It is a now cliched familiar tale. The craven media listen obsequiously and there is a nodding of heads. But there is never a question asked, a criticism raised; an attempt to present an alternative viewpoint. The great truth has not yet dawned; The emperor has no clothes.

In late 2018 further new evidence emerged from the US.
The U.S. Centers for Disease Control conducts an annual survey called the National Intimate Partner and Sexual Violence Survey (NISVS). The telephone survey asks about Americans’ experience with domestic violence. 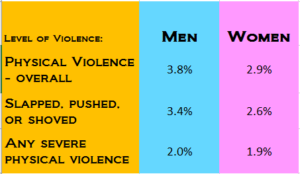 Previous surveys have revealed near-parity between men and women in their rates of partner violence. But the most recent survey reveals a dramatic shift: Men now are 31% more likely to be the victims of overall physical violence during the previous 12 months – 3.8% among men versus 2.9% for women. Even if we restrict to severe violence only, parity remains: 2.0% of Males are victims, 1.9% of females. This is extraordinary, mindboggling; it utterly refutes the victim narrative so obsessively spun by state supported groups and the media.
(Centers for Disease Control and Prevention. National Intimate Partner and Sexual Violence Survey: 2015 Data Brief – Updated Release, Atlanta, Georgia. 2018. Tables 9 and 11.)

Domestic abuse: 58% is bidirectional and of the rest women commit two thirds 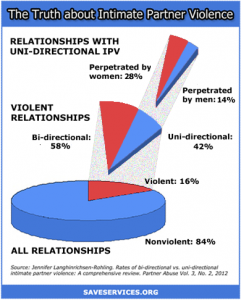 Equally dramatic is the chart showing that  the rate of bidirectional abuse is 58% and a breakdown of the 42% of abuse which is unidirectional; of this women perpetrate at double the rate of men.
Of interest, lesbian same-sex relationships have higher lifetime rates of physical violence, compared to gay or heterosexual couples (NISVS: 2010 Findings on Victimization by Sexual Orientation. Tables 6 and 7.

If we consider psychological abuse, the table gives a lifetime rate but not a rate for the previous 12 months.
Psychological Abuse, Lifetime: 36.4% of Women experience it; 34.2% of Men. Any coercive control: Women 30.6% ; Men 29.8%.

A second piece of evidence comes from Canada and Is dated April 15 2019.

Three Canadian sociologists are reporting on previously overlooked Statistics Canada data that fundamentally contradicts conventional wisdom on domestic violence, in particular by showing that men and women are equally likely to be victims, including of severe forms of violence.
The ground-breaking article was published in the journal Partner Abuse reports these conclusions :
1. Both male and female victims reported severe forms of domestic violence at alarming rates.
2. Gender was not a factor in whether an individual suffered long-term mental health effects of domestic violence, including experiencing PTSD-related symptoms.
3. The victim’s gender profile was only a relevant factor at the most extreme end of physical violence.

Canadian Association for Equality, CAFÉ, is conducting a federally funded research project “Male Homelessness as a Consequence of Domestic Abuse,” which has surveyed 250 homeless men concerning their experiences linking male homelessness and domestic abuse. The result of this will surely be eagerly awaited.

And still the false empty slogan continues that violence against women is “gender-based”.
Is it safe to assume that neither piece of evidence will matter a jot to the authors of the Second National Strategy on Domestic Sexual and Gender-based Violence in Cosc or to those in Tusla who allocate funding for services to the NGOs concerned?
Until we see recognition of evidence such as this in the Annual Report of Tusla we will continue to assume this.

The false empty slogan that violence against women is “gender-based”

A significant piece of news is that the old Amen has been dissolved; it is being reconstituted from the ground up and the board is being replaced by an entirely new one. This work has been ongoing since the second half of 2018; it is now clear there is a change of name as well. A new group Anyman with a new logo is born as was announced on June 27.
This fundamental change has been sorely needed for a long time. The old Amen was dysfunctional for many years, it was badly managed, had no ambition and required drastic surgery. It is hoped that what will emerge will be a dynamic new organisation, with a strong desire to expand beyond its provincial base and set up services in major cities, to provide services on a 24/7 basis with a realistic counselling service. For years its annual reports were lacklustre, shallow and provided little information. In 2015 it produced no report at all.

It was this last fact that led Men’s Voices to inquire into what was going on. Inquiries into why brought no satisfactory answers, just more of the meaningless platitudes that we had met with on previous occasions such as when we asked what the attitude of Amen was to the Istanbul Convention. This almost caused convulsions within the board which refused to make a comment.
We were one of the few to raise the alarm which we did in April 2017. Tusla had been quite content to allow the dreadful affair to drag on. It apparently was quite content with a toothless organisation which asked no hard questions, made no demands for realistic funding, and did not question the official narrative on domestic abuse.

The Future of Services for Men

In the next five years We need to see round the clock call centres in every city with experienced people on the phones and trained counsellors at hand. Dublin ought to have at least two, one on the north side and one on the south side. Refuges for men is another priority as there are none; there are 21 for women with more being demanded.
There will have to be a fundamental change of attitude within Tusla toward male victims and their needs. We asked Tusla in April 2019 what plans it had to establish a refuge for men. In a classic response we were told Tusla had carried out “consultations” around the country with stakeholders and had concluded there was no such need. Just who they consulted remains a mystery as Amen say they were not on the list, neither was Men’s Voices. When we asked about extending the present office hours to 24 hours a day seven days a week, we were told that possibly Women’s Aid could provide this!

Readers of this website will be aware that MVI complained to AIB over the episode of the Abusive Teller Machine so inventively devised by AIB in collaboration with Women’s Aid which we featured some weeks ago.
Our letter of complaint drew a meaningless response from the Customer Care division rather than the actual division that produced the video with no attempt to justify the figures given there, which was a major bone of contention. The figure given was that 10%(198,000) of women suffered financial abuse at the hands of a current partner. The NISVS survey quoted above provides a useful figure from the US for comparison. It asked a question on this very issue. The answer for Lifetime rates of abuse suffered was: